Recently... well, 4 months ago I guess... 4 months ago I went to America. It was a pleasant experience, not because I particularly enjoyed the country much, but because I got to go to a huge convention and see One Drop Design. One Drop are a yoyo manufacturer who make all their fantastic high-end yoyos in their tiny shop in Eugene, unlike most who get all theirs made in China. They have rigorous quality control, excellent standards, and bloody fantastic yoyos. Whilst there they showed me how everything gets done, and I got half a dozen throws for myself. I would certainly not pass up an opportunity to return, and I'm forever grateful. 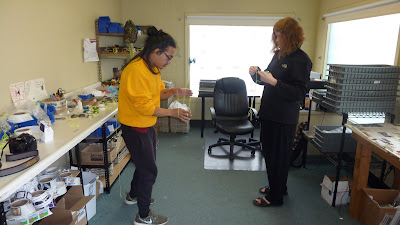 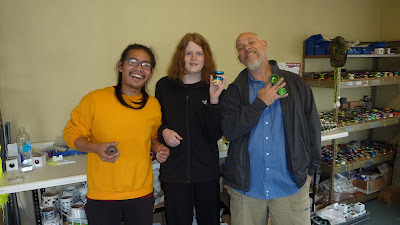 Alongside that I've made somewhat of a comeback to YouTubing last month. I have started a new Minecraft series where I travel back to Infdev and advance to the next version every episode. Currently I'm only two episodes in, but I hope that by the end of the year I can have at least 10 out. My goal is one-a-week, but that will be tough to make a reality.

Besides that, recently I haven't done that much. I have worked on my Cave Story modding a lot.

So my birthday has rolled around again, and so yet another step up the seemingly-infinite-step-ladder. Hopefully this means I can get a job soon so I can actually have a decent amount of money. (yay)

I'm going to a convention later in September, which promises to be fun. And Savlonic just released their new album "Neon" to their Kickstarter backers, so I have something fresh to listen to for a while. I'm working on making an animation for one of the songs that I like--"All-Smiles." Hopefully I'm able to finish it before 2018... ... ... considering how much things could have changed by that time, I... well, I could have a part time job and a whole new setup by then. I could get to know [REDACTED] better, and things could be all swell. On the other hand: I might still be unemployed by that point, and the whole [REDACTED] thing might not turn out so well. We'll just have to see weather I'll make a good employee.

The recent Humble Bundle reminded me that GameMaker(: Studio) exists, and so I'm delving back into that periodically. But who knows, perhaps it'll go somewhere? Well, I'm working on an action game, and if I finish it then it'll go up on my website.

I finally peripheral'd-up and got a Famicom Disk System last month, which is proving to be a lovely addition to the family. And using it I have discovered that my copy of SMB2 is legit, or at least a forgery good enough to work. I've also gotten Castlevania... well, not "Catlevania," but "悪魔城ドラキュラ," or "Akumajou Durakyura." Roughly translating to "Demon Castle Dracula," it's the title for the Japanese version of Castlevania. Either way, it's proven to be quite fun when it's not kicking you in the nuts 3 minutes in.

As for the CSTSFMC2016? I came 11th out of the 19 entries. Yeah, ouch! I can't believe it's been nearly 3 months since that, perhaps my lack of things-to-do since then has made the gap between then and now seem shorter in retrospect?

Hopefully that satisfies, (I know, I've been absent for so long) I actually have some things to talk about right now, which is fantastic when writing a blog post. So how about in the future I only post when I have something to say? Cool, see you then.

Ah, so I've been busy for the last 14 days working on a Cave Story mod for a contest happening on the Cave Story Tribute Site Forums. (The modding contest is called the Cave Story Tribute Site Forums Modding Competition 2016, hence the abbreviation in the title.) I have until the 7th of July to finish it, hopefully there won't be much rushing to get it done. This should be fun!
For more information on the competition itself, please visit  the forum thread: CSTSFMC2016 Thread.
Post by: zxin At 11:45 PM No comments:

Hello everybody, I bring you this blog's 199th post in hopes of informing you that this blog still isn't dead... just really inactive.

So in terms of projects(, and actually working on them) I've been doing quite well.
One of my friends and I have banded together to start work on a script. And hopefully something will be made of it.
I also started work on making a series set in the same universe as my old story-driven "Minecraft SMP" and "MAMB HQ" series. It's going quite well, and I've gained a bit of help from the afore mentioned friend on this project too.
However this doesn't change the fact that I have over 20 projects to work on, and almost no spare time to do other things. (Other than moderate a Minecraft server)

In other events animated band Savlonic have released a Kickstarter for their second album. It's only just reached it's first goal, and Implore you go and check it out using the following link: http://kck.st/1UxWquY.

That's about all I have to say for now. Sorry that this post seems kinda... disjointed and odd, but that's just how bad I am at journalling.

Thanks for reading, thanks for your time,
~zxin
Post by: zxin At 4:12 PM No comments:

Hmm, what if an operating system could open files from Windows MacOSX and Linux?
Pfft, easy... well no.

So a month ago this blog pretty-much died, I stopped posting and forgot about it entirely, how neglectful of me. As I write this post I just received an email that says the following:

That pretty-much sums up the response from my readers.
I will now reply to a commonly asked question around the internet and the world that is asked when someone returns from an unknown location after a bloated amount of time...

I'll tell you where I was, Japan, as the title may suggest.
Now before you run around running and screaming or just commenting "Lucky" I want you to consider how many other people would do the same thing.
Japan is, most certainly, above all else, quite well suited to me. It's full of delicious, inexpensive food. The people aren't obnoxious or deserving of a slow painful death. There is a distinct lack of sunlight, like in the UK, but it's still very hot and humid in the summer.
Also if you ever happen to go to Japan yourself, be sure to go into a Family Mart and get a packet of what appear to be 4 pancakes for ￥108, what are they? They are, in fact, 2 pancakes sand-wedged together with butter and maple syrup in them, there are also variations such as the lighter ones which have a lemon-ish custard in them.
The one thing I can say is that if you hate rice then Japan isn't really for you, since some Japanese people are happy to eat white rice on it's own. Vending machines are abundant, and have a variety of lowly priced drinks in them, some other vending machines I saw dispensed:

If after all I've said you don't think Japan sounds very interesting then you should be glad to know some things in Japan change as you move around, like with any country.
That's all I can type for this month,
Thanks for your time,
~zxin
Post by: zxin At 3:09 PM No comments:

As mundane as my "real life" is, it does have it's interesting stories, here is one of those such stories:
So today I wen't to my local Library and to my surprise it had both of Yahtzee Crosaw's novels in it's database, Mogworld and Jam. Only Jam was at the Library I was at, the other was at another Library, so I got Jam and wen't to the shops. I read the first 2 pages of the book, it is mentioned that the "Man eating Jam" is strawberry scented/flavored, so when browsing for Jam that I wanted I ended up getting strawberry flavored jam... Fuck.
Thanks for reading,
~zxin
Post by: zxin At 6:42 PM No comments:

So last month can be summarized as 'Meh', I didn't make any progress on anything and I didn't do anything particularly outstanding... Except Terraria. Holly shit, Terraria.
Recently I've been playing Terraria like an addict would take a drug, it's been very fun. Especially in multiplayer. I think it must be one of the most addictive games I've ever played, and the most rewarding.
Other than that I don't have much to say about last month, hopefully I will have another update out in September.
Thanks for reading,
~zxin
Post by: zxin At 8:43 AM No comments:

Hello everybody! Yes, it's a new month and a new font. (Well it's a new month for me anyway.)
So first of all, I've been working on N.E.T. Story II and I'm exited to say I've found a subtitle I'm happy with. So from now on it shall be known as 'N.E.T. Story II: The Surface'.
Second of all, back in June my Oh the joy Fanimation went from around %60 to %100 complete. You can watch it by clicking here. Please be sure to tell me what you think.
And third of all, I got my Cave Story+ Machine Gun Challenge time down to 1'40"5!
Fourth and finally: Retro.
Yes, retro, you heard me, retro. This month I've gotten my hands on a Nintendo Entertainment System. (Or an N.E.S if you're cool with that.) It was pretty cheap, costing around $115 including postage. The box itself (The NES console I mean) is in pretty good cosmetic condition, there's some pen marks on the flap you lift up to insert the cartridges. The console also came with Super Mario Bros. and Digger T. Rock both complete and in pretty good condition.
The console came with an RF switch and 2 controllers, and as you would expect, a power cord. For an extra $20 they also threw in Super Mario Bros. 3 with the manual, which I've read trough and it appears to be in practically mint condition.
Also later on I got Super Mario Bros. 2 USA, and right now I'm planning to either get a Famicom and a Disk System or a Twin Famicom because I've heard they're much easier to plug into the TV. But we'll see. After I've gotten a Famicom and maybe the original Legend of Zelda I'm going to look into getting a Super Nintendo Entertainment System, I don't plan on getting a Super Famicom. I wouldn't get a Nintendo 64, but it has The Legend of Zelda: Ocarina of Time which I've heard is the best game of all time. Dammit. Once I have an N64 I'll probably get a Sega genesis, just because Sonic The Hedgehog.
Thanks for reading,
~zxin
Post by: zxin At 4:39 AM No comments: